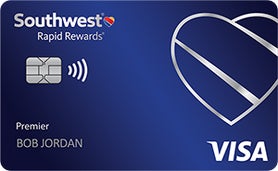 The Southwest Rapid Rewards Premier card is the mid-tier option for personal Southwest credit cards. The card offers the same 3 points per dollar on Southwest purchases as the Priority card and 6,000 bonus points on your card anniversary.

Card Rating is based on the opinion of TPG's editors and is not influenced by the card issuer.
3/5

Like most airline cards, the Southwest Rapid Reward Premier card mainly consists of airline-specific perks. The Premier offers two annual EarlyBird check-ins, no foreign transaction fees and 6,000 bonus points every card anniversary for an annual fee of $99. It also offers the ability to earn Tier Qualifying Points based on spending if you intend to gain A-List status. Finally, the points you earn on the card count toward the carrier’s coveted Companion Pass.

Editorial Note: Opinions expressed here are the author’s alone, not those of any bank, credit card issuer, airlines or hotel chain, and have not been reviewed, approved or otherwise endorsed by any of these entities.